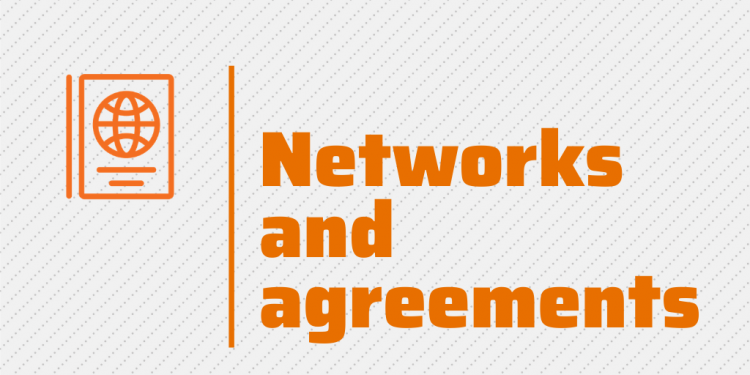 In order to build links with other universities and international organizations, UNCuyo takes an active part in different COOPERATION NETWORKS. These networks—funded by membership fees—conduct joint activities and promote different programs.

The Association of Universities known as Grupo Montevideo is a network of Latin American public universities that was created back in 1991. The group is comprised of more than 2 million students from different countries and over 120 faculty members. The Montevideo Group is made up of the 30 largest and most prestigious public universities of Argentina, Bolivia, Brazil, Chile, Paraguay, and Uruguay.

The Inter-University Development Center (CINDA, for its Spanish acronym) is an international academic institution made up of important Latin American and European universities. Its main purpose is to forge links between member universities by engaging in horizontal cooperation. UNCuyo has been a full member of CILDA since 1993.

THE ASSOCIATION OF UNIVERSITIES OF LATIN AMERICA AND THE CARIBBEAN (UDUAL)

The Association of Universities of Latin America and the Caribbean (UDUAL, for its Spanish acronym) was created in 1949. UDUAL has over 160 affiliated colleges spread in 22 Latin American countries. This nongovernmental organization recognized by UNESCO promotes integration within Latin America and the Caribbean through the joint efforts of member universities. UDUAL promotes integration across a vast range of activities, including research, communication, networking, undergraduate, graduate, and postgraduate activities.

The Interamerican Organization for Higher Education (IOHE) was created in 1979. IOHE is a non-profit association made up of approximately 300 institutions and universities. Its main objectives are to promote cooperation in education among member institutions. OIHE is comprised of an exclusive network of members from 25 countries in the Americas.

THE ASSOCIATION OF IBERO-AMERICAN EDUCATIONAL AND CULTURAL TELEVISION

Since 1989, this association of universities is an essential operator of the institutional francophone. Collaborating with the higher education and research establishments that have chosen French as a language teaching offers several programs of cooperation whose essential purpose is to support research and french teaching. The AUF is currently a red of 774 establishments spread all over the world throughout 90 countries. Each year it grants over 2000 scholarships in the sphere of its programs in mobility.

The main purpose of the project is to evaluate the high level researchers, mobilize and share these excellent skills with other establishments. In this way, technical and  financial partners (development agencies, NGOs, and the private sector) will find universities for their fields of interventions, as well as the means of communication which are looking for experts to analyze the present day.

AUF (Agence universitaire de la Francophonie) is a global network of French-speaking higher-education and research institutions created in 1989. AUF cooperates with those institutions that offer education in French and hosts several cooperation programs aimed at promoting and supporting the use of French language in research and education. At present, AUF operates in all continents and in 90 countries through a network of 774 institutions. Every year, AUF offers more than 2,000 scholarships as part of their mobility program.

From 2019, the UNCuyo is part of the net of institutions bound to the Iberoamerican University Association for Postgraduate Studies (AUIP), which allows graduate students to gain access to a wide offer of academic training abroad. AUIP is an international non-governmental organization acknowledged by the UNESCO, and it is dedicated to promoting postgraduate studies in Ibero-America. Currently, it is integrated by almost 185 prestigious institutions of higher education in Spain, Portugal, Latin America and the Caribbean.

From its creation, the OUI has become a referent to the academic community of America since it is an interamerican net that offers quality services to its members. Its current efforts are focused on the implementation of internationalization strategies through the management of a wide variety of international events, missions, and programs of professional development with the purpose of providing new opportunities to its member institutions.

The Interamerican University Organization works in areas of university management and scientific cooperation bound to the socioeconomic development, production and diffusion of information about higher education; development of communication nets for teaching and researching. This institution supports the activities of the member institutions and the different cooperation programs, which include:

Institution of Management and Leadership of the University: it supports the development of the commonalities in Interamericaigher education. It also includes online courses, training in the same place, academic stays, and institutional projects:

College of the Americas:

A  net of interamerican training (RIF) of university consortium which offer joint academic programs which provide an interamerican, interdisciplinary and intercultural perspective on topics of regional interest. The RIFs include:

-equitative development in women and gender;

-Training of trainees in aboriginal education;

-Connectivity of the university libraries;

-The internationalization of higher education

CAMPUS: it directs the institutional strengthening of the OUI and its members, and its objective is to build common areas of higher education. Strategic objectives: common area of higher education of Latin America and the Caribbean (ELES); Program of Collaborative PhD, and areas of Research Incubators; Management of knowledge and Web 2.0 in the OUI; Spirit and principles in the Universidad del Siglo XXI.

Intercampus: Interamerican space for mobility and Academic exchanges. Its purpose is to facilitate the creation of the higher education area of Latin America and the Caribbean (ELES), which grants the Interamerican Award to the protagonists who have been distinguished through the support of  the activities of american cooperation or through the help to establish cultural bonds among the different countries of America. Several nets, which became autonomous later, have been initiated: Education on the Amazonía (EDAMAZ); Interamerican Center of Studies on Water Resources, Interamerican Consortium of Distance Learning (CREAD); Interamerican net for the improvement of the environmental quality. It organizes congress every 2 years; meetings on Programs of Collaborative PhD and Research Incubators.

The Latin America Exchange Program arises from the basis of the agreement of academic, scientific and cultural collaboration which is entered between the Colombian Association of Universities from the Colombian Republic, and the National Interuniversity Council of the Argentine Republic. This agreement led to the signing of a specific agreement of cooperation for the exchange of undergraduate students between the universities of Colombia and Argentina. The program is destined by the academic staff who fulfils works of direction, planning, coordination, organization, counsel, and/or administration who to contribute to the manner of plans and policies. It gives the university staff the possibility to fulfill stays of training which provide  tools which allow for an internationalization of the developed activities.

This network was created in the year 2010 with the purpose to develop and widen the oenology and viticulture field with academics, research centers, and industrial partners at an international level (over 55 partners all over the world). It is coordinated by the University of Bordeaux, Institut des Sciences de la Vigne et du Vin (France) and it is the first and only international net of oenology and viticulture. International Oenoviti is focused on the excellence regarding research and education. Its main purpose is to promote the exchange of the know-how and the experience among the actors in the wine world. It promotes synergies through the intensive collaboration that includes the development of transferable skills with successful partners who are internationally recognised in the field of viticulture and oenology. This innovative approach is based on the multidisciplinary mobility and exchange of experiences.